One large ongoing project I have is my “old” car. Her name is Sue, and she is a 1989 Nissan Sentra that my dad purchased brand-new in 1988 when I was only a year old. My dad used this car as a daily commuter for about 14 years until he got a new Civic. A year later when I was 16 I started using this car as my primary vehicle, pretty much just driving to school and back and doing lots of teenager things. 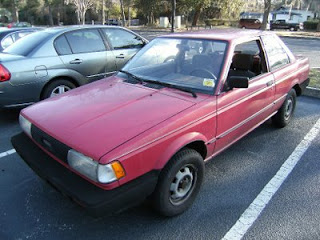 My dad has been telling me about once every two years that “It’ll be great if this car gets you through a year of high school/through high school/through your first year of college/through college/a year or two longer.” Since she’s made it this far, I’ve decided that she’s not worth anything to anyone but me so I might as well turn her into a project car (even though I’m more or less the original owner). Sue is very, very reliable for being 20 years old, so the plan is to restore this car to how she was when she was driven off of the showroom floor. 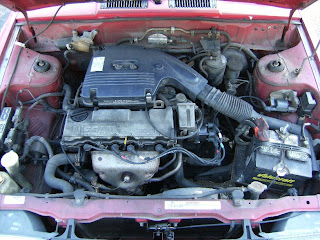 This is Nissan’s famous GA16i engine. It’s a fuel-injected inline-four that develops around 90 horsepower and probably an insignificant amount of torque. It is a great engine for getting to and from work (I work in North Charleston, the seventh most dangerous city in America, on Ashley Phosphate road, a road that is one of the most dangerous roads to drive on in the country) and for getting surf boards to the beach. This engine has a timing chain, which means it’ll run forever as long as the valves and seals are kept up. This particular engine has around 170k, which actually isn’t a whole lot for a 20 year old car.

The two things that are not visible from these pictures are the wheels and the muffler. The wheels are the original wheels, but the original paint fell off sometime before I was 16. I painted them gray with Rustoleum but that’s starting to fall off now, too. It also dosen’t help that Sue has front disk brakes and rear drum brakes, which causes brake dust to accumulate on the front wheels but not on the rear wheels.

The muffler is not visible because it is non-existent. It fell off about eight months ago and just hasn’t been replaced. The lack of a muffler gives the GA16i quite the exhaust note, but it’s not so loud that its noticed by cops. And it helps to be in South Carolina where there are no state inspections of vehicles. Hooray! 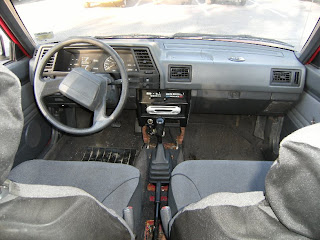 You can see the amount of work that’ll need to be done to the interior. I’ve removed some of the front console and the entire center console, and you might be able to see the huge cracks on the dashboard that have come about from parking this car outside for about five or six years. That’ll need to be replaced too. Everything else is in pretty good shape except for the seats, which have some pretty big rips in them. If I can find some new seats to replace these, I’ll remove the seat covers. 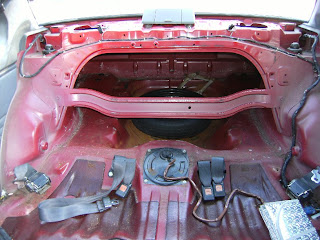 I recently removed the back seat, partially because the rear deck and tail light assembly need to be replaced due to sun damage. The other part is that I will hopefully be able to fit my 8’2” surfboard in the car without putting it on the roof rack (I don’t like driving long distances, i.e. Florida, with what is pretty much a huge wing strapped to the top of the car). The rear seats are in good condition, but all of what is in this picture is incredibly dirty and some parts have started to rust. The trunk needs to be de-rusted as well because my dad drove it around for at least a few years with a leak in the trunk that allowed a large amount of water to collect in the spare tire bay.

Needless to say, this car has not been too popular with some of my friends who just happen to be girls. (On the opposite end of the spectrum, anyone who has ever driven this car and has helped me work on it loves Sue.) After I bought and (through no fault of my own) crashed a motorcycle (Ana Maria, an 07 Kawasaki Ninja 250R), I now have Felicity, which is my “new” 92 Nissan 300ZX that gets 16 miles to the gallon and goes from 0-60 in about five and a half seconds. 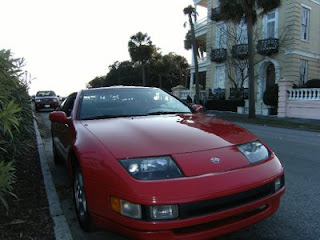