So my neighbor calls Monday night from the BB&T parking lot. Maggie (the Jeep) won’t start! My truck’s radiator is in the living room so I put a bunch of tools in Sue and we drove off to try and get the Jeep fixed. All the electrical equipment in the Jeep was working, but I decided to try and jump it off any way. That didn’t work. I had this same problem right after I bought my truck though, where the truck wouldn’t jump off because the battery terminals were bad. So I cleaned the battery terminals on the Jeep. That didn’t work. All that was happening was the Jeep was making a clicking sound from around the transmission whenever anyone tried to start the ignition. 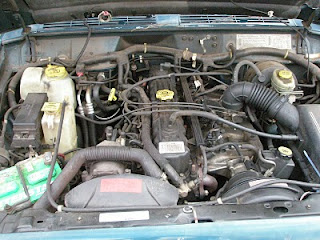 So I call my other Jeep friend for a tow (because my truck is out of comission, sadly), and while he’s there we decide that we should just hit the starter motor really hard with a blunt object. This got the Jeep cranked up well enough to drive home, but seeing as how my neighbor can’t just get under her Jeep and hit it with a hammer every time she wants to go somewhere, I decided to look into replacing the starter motor. (The reason this works, temporarily at least, is because when the starter motor goes bad it sticks and won’t turn at all unless it’s nudged a little by a hammer blow or something like this. This is only a temporary fix, eventually even hitting it really hard won’t get the engine turned over.)

I found a forum post about someone who was having the same issue. The solution is fairly straightforward: Remove two wires, then two bolts, don’t let the old motor land on your face, put the new one in, screw in the bolts, attach the wires. Oh yeah. DON’T DO ANY OF THIS WITH THE BATTERY HOOKED UP. Remove the negative terminal first. Otherwise, bad things will happen. Some of the bolts are in kind of an awkward position, and I had to use a cheater bar to get the topmost bolt started, but it was a fairly simple fix.

Another important point is that the starter motor is not in oil in the engine, so when the motor comes out, oil should not spill from anywhere. This brings up something interesting that happened while I was doing the repair, though. When I removed the positive and negative wires from the starter motor, old engine oil had collected in the housing for the wires and leaked out all over everything. This is perhaps proof of the theory that the starter motors in these Cherokees go bad faster than normal due to their location directly under the oil filter. So, any time the Jeep goes in for an oil change, dirty oil spills all over the starter motor. Not exactly healthy. But the entire engine bay of this Jeep was covered in WAY too much grease which somehow got on my pants? Seriously. It went everywhere. So I’m not going to fret over a little stray engine oil.

Any way, here are the pictures: 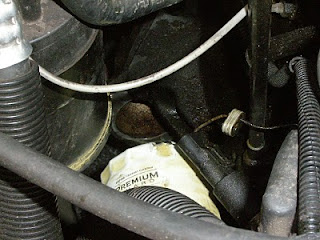 The hole just above the oil filter (white) is where the new starter motor will go. This was right after I removed the old one. It is a view from above the engine bay. 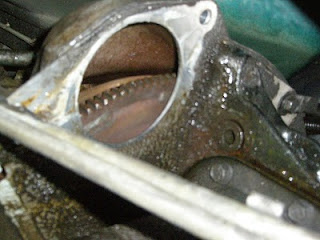 This is the view from below the engine bay. The flywheel is visible in this picture. 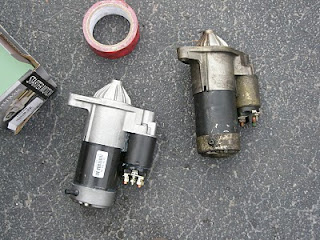 Old and new starter motors. And some red duct tape. The new starter motor cost right around $100 from Advance Auto, but when they get the old one back they give out a $30 rebate. Not really sure why, but that brings the total to about $70 for the parts.

Also important to note is that the bolts for the starter motor are different lengths. The short one goes on the top, the long one on the bottom. It took A LOT of cranking on the socket wrench to get them back in. But all in all, not a huge deal. 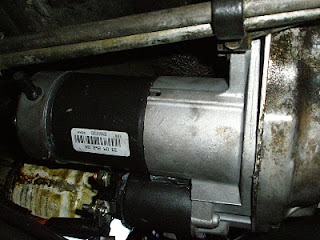 New starter motor. Complete with my greasy fingerprints. Awesome! After that, I hopped in the Jeep and it cranked right up. Fixing things is handy. Can’t believe that Clemson Automotive wanted almost $400 to do this repair. Pretty ridiculous. Hooray saving $330!