Let me start by saying that this is an old and already completed project, but I felt like I needed something other than computers up here to sort-of dial back the “power nerd” thing I had going on. Then again, maybe building a lamp from scraps isn’t the most normal thing, but it’s at least better for you to read about than me messing around with UNIX. Eew.

Any way, my roommate and I moved into a place in Charleston a while back and were not prepared for the condition our apartment was in. It was in great shape, but didn’t have any lights in it except the kitchen. And maybe the bathrooms. There were light switches for the main rooms, but you needed to provide your own lamp. I had only brought one lamp because my parents wanted to throw it out (hooray cheap college-type furniture from the 80s) and that had to go in my room so I could get dressed and do other important “life” things. I don’t remember what my roomie did for a lamp, but we didn’t have any lights besides the kitchen and our TV in the living room. We talked about biting the bullet and spending money on a lamp from Wally World, but then I realized I could probably build a lamp for cheaper than I could buy one. (Plus, I like building stuff. I also really hate going to Wally World.)

First I found my trusty roll of electrical tape. Then I gathered spare building materials. I had just finished building a sort-of shelf for the trunk of my car (more on Sue later) and I had some spare wood left over. Toss in an old extension cord to connect all the bits, and the only parts I had to buy were the switch and the base for the lightbulb, and these ran me about $5.

From the top down: I electrical taped the base for the lightbulb to one end of the leftover wooden post I bought for the legs of the shelf I built. Sure, I could have glued it, or bolted it down, but times were rough, and we only had daylight available for a couple hours a day. No time to be dainty. 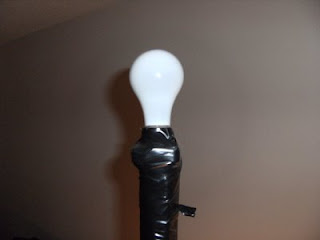 Also, I went with the classic incandescent bulb. It’s not a matter of light quality, or that I’m a huge fan of Thomas Edison (he was kind of a dick). It was just lying around so I used it. But once it burns out I’m totally going with the flourescent bulb. Those babys might not be real environmentally friendly, or great to have around pregnant women, or easy on the power grid, or safe in general, but they are real easy on the power bill, and what really counts is saving me money.

Next I cut up the extension cord and attached it to the various parts, making sure to run it through the light switch too. The switch has a neat feature where it illuminates when it’s off so you can tell where it is. I didn’t know that when I bought it, but it is quite handy. 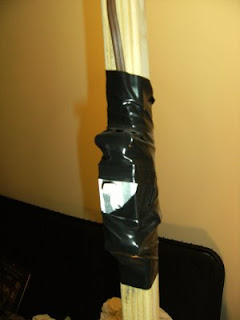 Pretty much all that was left was making it appropriately tall, which was accomplished using some orange stakes and another piece of wooden post. And lots of electrical tape. The base I used at first involved wood, but it didn’t survive moving, so now I just have it zip-tied to a futon. It’s not the most attractive thing, but it works. And this current model has survived three moves, so even though the electrical tape might not look savory, it does the job without starting fires. And that’s always a bonus. 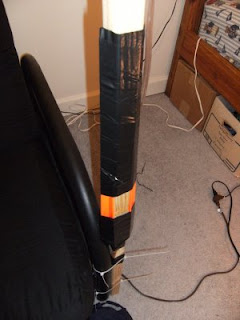 As a side note, I feel I should mention that you should NOT build the lamp in a place you don’t want it to stay, put a CFL (compact flourescent light) in it, then lift it up to move it without first noting available clearance between the lightbulb and the celing. Otherwise, a glass tube filled with mercury is liable to shatter on the celing and shower you with bits of glass and other unsavory things.