I will be doing this project in parts because it’s fairly labor-intensive and should take a couple of days. Turns out my truck has a timing belt in it, and not a timing chain like the guy who sold it to me told me it had. Any way, the Nissan dealer wanted $759.95 to change the timing belt, but the parts (including a new water pump, new thermostat, and new drive belts) were only $290, so I figure I could save myself a ton of money by knowing how to use a wrench. I already saved myself $150 by changing the oxygen sensor in the truck myself. Not sure why the dealer wanted 1.5 hours of labor to basically loosen a bolt, but whatever. Any way, the reason the timing belt needs to be changed now is that this service is due at 105,000 miles on these Frontiers. Since the guy who owned it before me thought it had a chain, it never got done. His mechanic is probably an idiot, because the guy who sold me the truck took great care of it, that’s mostly why I bought it. Any way, the truck just turned 127,000 miles old and with the belts still not changed, I’m not risking driving the truck until it gets done. 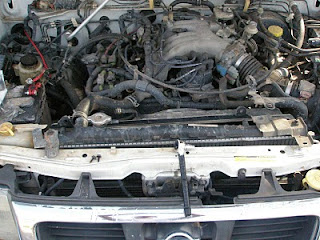 Any way, the first step is completed as of yesterday, and the radiator and cooling fan of my truck are currently up against the wall in the living room (temporarily). A couple tricks here that I came across:

First of all, the cooling fan cowling has to be removed first. It kind of wraps around the cooling fan so I had to bend the cooling fan back a little to get it out. Once it’s unscrewed from the two bolts on the top of the radiator it’s not really a huge issue, it’s just a tight squeeze. Next is that draining the radiator is a pain. On the Frontiers, the cap is almost directly under the frame rail, so a funnel was needed and some coolant got on the frame rail and one of the rubber engine covers. I got as much of it off of those parts as possible.

Apart from that, just removing the two large hoses and the one little one connected to the coolant reservoir (making sure that the little hose doesn’t drop below the reservoir) and the two bolts on the top of the radiator will allow the radiator to be lifted almost straight out of the engine bay. I left the bottom hose on the radiator and detached it from the engine instead, to keep coolant from leaking out of the engine. The coolant was extremely dirty, and since I don’t know the last time the cooling system was flushed, I’m going to put enough coolant in to make it to the dealer and have them do it for me. Hopefully they’ll also dispose of the gallon and some of coolant I collected in a bucket. 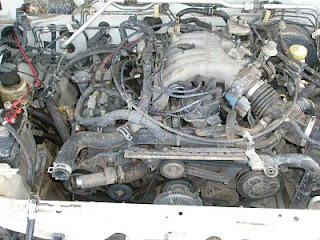 Any way, after the radiator and fan cowling were out, it was fairly simple to undo the four bolts holding the fan. The next step is removing the accessory (drive) belts, which a friend of mine is going to help me with, since I’ve never done it myself. I don’t want to spend any more money! With the radiator and fan out, the drive belts are front and center in the engine bay. 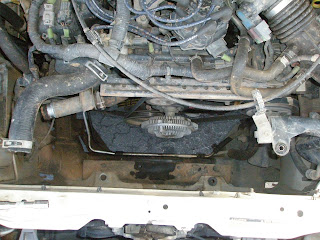 Hopefully everything goes smoothly from here. If not, there’s a mechanic right down the hill from my apartment so I could just coast down there and have them fix whatever. Hopefully it doesn’t come to that, but it’s always good to have a backup plan in place.

I got the new timing belt in my truck successfully by following the following three threads at ClubFrontier.org

On to the pictures! The first one was after draining and removing the radiator, including the fan cowling and fan. Coolant goes everywhere! 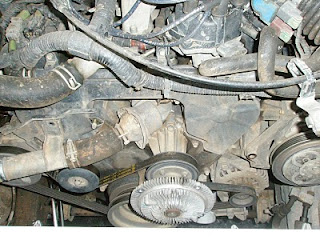 Next, I pulled off all the old accessory belts. The first tensioner pulley bracket was removed (the one for the A/C). The one for the power steering and water pumps is still attached, and also attached to this bracket is a hose going to the thermostat/water pump. This picture still has the alternator belt on but that’s pretty easy to take off. The alternator actually has its own tensioner, which is a nice piece of engineering. 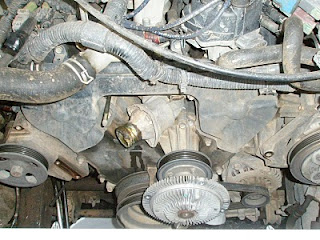 These are some of the parts out of the truck in the order I took them off, from left to right. First was the top tensioner pulley bracket for the air conditioning compressor, then one of the hoses leading to the water pump, then the tensioner pulley for the power steering and water pumps (which I stripped a nut off of and had to order a new one. That will probably be mentioned again later), then the top cover for the timing belt. 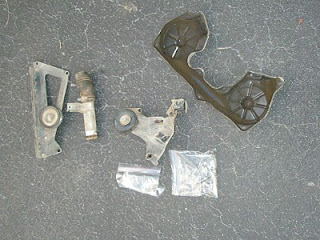 This is what the engine looked like with these parts removed: 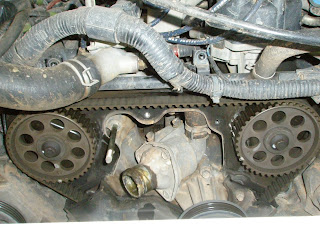 Then I removed the bottom cover for the timing bolt, all the screws for it (they’re different lengths so be careful), and the crankshaft pulley. DO NOT USE A JAW PULLER ON THE CRANKSHAFT PULLEY. There’s a chip off of mine from where I tried to do that. These pullers require a harmonic puller and two M6 x 1.00 x 80mm bolts to get it off.

Fun story here: The crankshaft pulley bolt is a bear to get loose. My buddy and I tried a breaker bar at first but then had to find an air compressor and a pneumatic impact wrench. However, without removing the air conditioning condenser, there was only about a quarter inch of room to maneuver the impact wrench. So when the bolt came off it shot the wrench into the condenser and we had a rough time getting it out. Also, the compressor was full of mud for some reason and it almost destroyed the wrench. And we had to tow my truck behind my buddy’s jeep to get it close enough to the compressor, which was fun because I live in an apartment. I should have taken pictures of how we maneuvered the two vehicles. It was impressive. Any way, here’s the parts I removed, minus the crankshaft pulley bolt (which is 1 and 1/16 inches): 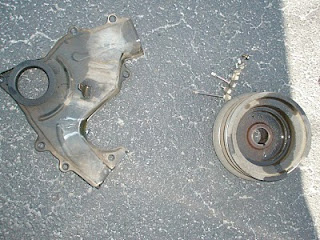 This is what the engine looks like with the covers off. It still has the old belt, old thermostat, and old water pump on it. 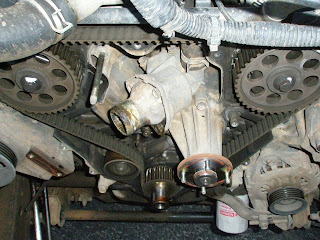 This is what the crankshaft sprocket should look like. The picture is rotated 90 degrees clockwise, so the punchmark should be on the bottom right-ish. 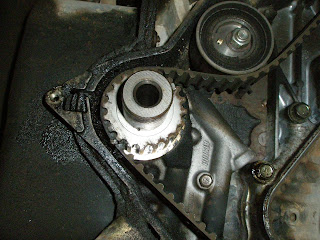 Finally, a picture with the new thermostat (you can see the red RTV silicone I used), new water pump (it’s shiny), and new timing belt (it’s clean) on. Make sure to get a factory Nissan belt with all the markings on it. Also make sure to put it on in the right direction, I put it on backwards at first and none of the markings were lining up and I freaked out for a second, but then realized and switched the belt and everything lined up. 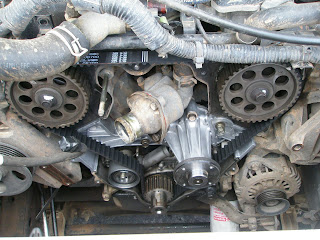 A few things to note here. First of all, don’t put the new belt on until the water pump and thermostat have been changed. Coolant will go everywhere, and coolant should not get on the timing belt. Also, part of the water pump sits behind the belt itself. I wanted to get the water pump off with the old belt on in case I jarred one of the camshaft gears but it’s just not possible. Nothing bad happened though so that’s good, and now I have a new water pump! Hooray. After this, I put the crankshaft pulley bolt in so I could turn the engine over a few times with the breaker bar to listen to make sure the engine was timed right. After I turned it over a few times, I started it up just to listen to it run, but only for about fifteen seconds. This will not hurt the engine at all, and it’s a good sanity check before spending the hours it takes to get everything back in.

Also, a torque wrench was needed to get the crankshaft pulley back in. It requires around 145 foot-pounds of torque which is a lot. We got it as close as we could, but could really have used a chain wrench to hold on to the pulley instead of one of the old accessory belts.

I think that’s all for now. I’ll put up pictures of the destroyed pulley bracket later on.