My grandparents recently moved out of a five-bedroom split-level house into a two-bedroom apartment in a retirement community. When they moved they asked me if I wanted any furniture out of their house for my own house, and I immediately responded yes, I wanted their record player.

I know, you might be thinking “a record player isn’t a piece of furniture” but wait! This one is: 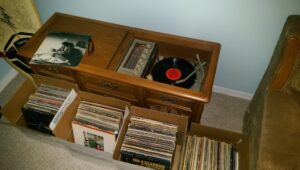 These were called “consoles” I think. They’re huge, and they’re made to look like a piece of furniture during a time when a TV was also a giant piece of furniture. Growing up, my family would take trips up to Virginia to visit my grandparents, and about the time I was in middle school I realized how awesome this piece of furniture was. I used to play music on it all the time (although my dad and his sisters had already taken their awesome records, so the records that remained were slim pickins).

I picked it up in winter of 2013 right after I bought my first house, and it pretty much just sat around. I have a lot of records but I don’t play them that often, so I started thinking I could get a little more utility out of it if I could modernize it a little bit. And wouldn’t you know, I had a little Bluetooth receiver in my parts drawer just waiting to be used!

First of all, I had to take the back cover apart to see what I’m working with. While the woodworking on this antique is flawless, the electrical could use some modernizing as well, so in addition to adding Bluetooth I also decided to re-wire the speakers. 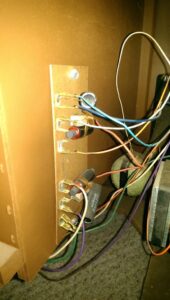 This block, I found out, was a set of filters. The cabinet has four speakers, two for each side of the stereo. One of those two plays higher frequency sounds (the “horn”) and the other one plays low frequency sounds (the “woofer”). The speakers were still in good shape (surprisingly, for being about 50 years old) so I just replaced the old 18-gauge loose wire with new 12-gauge balanced speaker wire 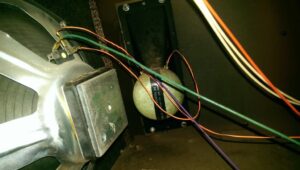 Above is some of the old wiring, but it shows the woofer on the left and the horn in the middle. 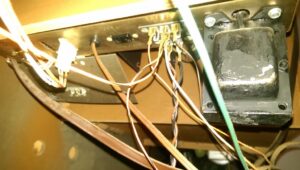 This block was bolted to the underside of the electronics for the radio. I should also note here that I use the term “electronics” very loosely, since this was the 60s it still wasn’t common to use integrated circuits or transistors for most things, so the radio is full of tubes and is very heavy, and the record player is largely controlled mechanically. This is even more of a feat, as the record player is automatic. I’m spoiled by having access to programmable, cheap microcontrollers and therefore am flabbergasted how they could do all of this without the tools that I have. 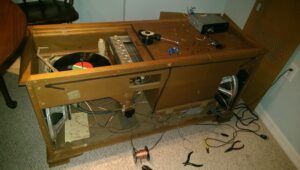 After rewiring everything, I decided that it would be a good idea to add a second amplifier (from a car) and switch the speakers into the new amplifier with a set of relays. This is much easier than trying to figure out where the audio pathways on this antique record player are, and trying to impedance-match all of today’s modern audio electronics to it. 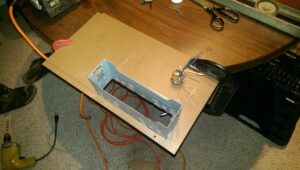 New head unit/amplifier and switch installed on the left side of the cabinet. The switch originally was for selecting between internal and external speakers. 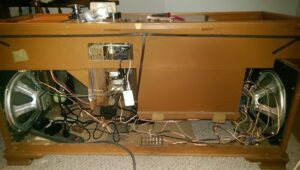 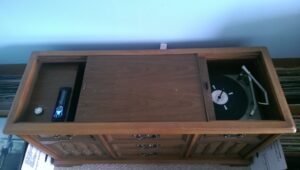 I completed this project back in January and it’s still going strong! As I anticipated, once I can easily hook up modern technology to it (my phone), I’ve been listening to music a lot more with it. It’s become my primary stereo in my house now, and it has a great antique look to boot! Also, it has a front auxiliary jack in case you have an old MP3 player or something, and a CD player too! I’ve used all of these new features, but I’m also happy the record player still works as well!