So my MythTV computer has been down for a while, so I decided to go ahead and try and fix that computer for the thousandth time so I can do the whole DVR thing again. For those that don’t know, MythTV is a free and open-source software project for Linux platforms that lets the user do all the cool television things that you could do with a DVR (TiVo). Like any Linux software, though, it takes some fiddling. For me, it takes a lot of fiddling.

I started this project about three years ago with an Emachines computer (1.6 GHz Pentium 4) I bought from a friend for $150. I put in an nVidia GeForce 5500 FX graphics card in it (it had VGA, S-Video, and DVI out, so I had lots of options.) The card was state of the art at the time I bought it. I also bought a Hauppauge WinTV PVR 500 which has [unnecessarily] two TV tuners on it. What I didn’t realize, though, is that there’s only one coax input on it, so it makes the second tuner kind of useless for me, since the only video input it takes is component or S-video, and who uses that for TV? 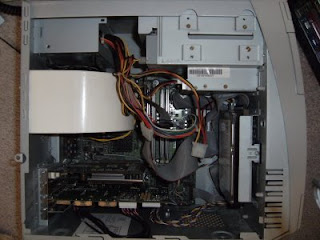 Any way, the cooling fan on the graphics card was the first to go. I was young at the time, so when it started making buzzing noises, I took a paper clip and some electrical tape to physically stop the fan from turning. This actually caused more damage to the card, because when you stop a motor like that, and power is still applied to it, bad things happen. After THAT damage was done, I realized the power to the fan could simply unplugged from the card.

Next, the computer only came with 128 MB of RAM in two 64 MB sticks. But it’s not just any SD or DD RAM, it’s a very special type of RAM called RDRAM. Basically, if you bought a computer in the four months before DDRAM took hold, you might have this type of RAM. The only thing to know about it is that it’s slightly faster than SDRAM and generates an enormous amount of heat. Any way, back in the days of Ubuntu 5.10 Breezy Badger, 128 MB was just fine. I made the decision to upgrade when 7.10 came out two years later, and 128 MB wasn’t enough any more. So I upgraded the RAM to 1 GB using four 256 MB sticks.

To deal with all of these heat sources (the Pentium 4 was notorious for doubling as a space heater, the broken cooling fan on the graphics card didn’t help, and the four sticks of RDRAM pretty much put the computer over the edge as far as heat is concerned) I mounted a four-inch, 120V AC box fan to the side of the case which blows cool air into the computer. It’s a little bit noisy, but it works. Well, sometimes I think it causes a power surge to the computer if something gets in the way of the blades of the fan, which is not particularly healthy for the computer. But at this point, I’ve put too much work and money into the computer for me to give up on it. Kind of a catch-22. In a moment of frustration, I did try and move the hard drive and TV tuner card into this bottom-line Dell I got for free, but the tuner card was too long for the unusual enclosure that Dell decided to put around its PCI slots. I hate Dell. 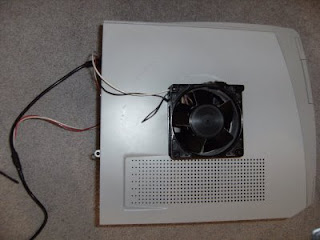 Any way, the latest cause of failure for this computer is that MythTV simply locks the computer up when it starts. I’m not exactly sure how to deal with this, I think I’m going to try and reinstall Myth but that’s a last-ditch effort before reinstalling Ubuntu just to get a fresh start on everything. We’ll see what happens.

OK! Reinstalling actually worked, which is good because I had lots of episodes of South Park and Becker saved. Hopefully it lasts for a while before it breaks again.