My first MP3 player was pre-iPod, and I bought it second-hand from a friend of mine in high school for $100. It’s an Archos Jukebox Recorder 20 and is probably the greatest MP3 player ever made to date, despite its age.

Let’s run down what made (and still makes) this media center great. First of all, it doesn’t have a scroll wheel. That means that if you’re driving, and you know the song you want to hear is three songs from the one you’re listening to, you press the button three times and you’re there. No more mucking about with the scroll wheel always going either too fast or too slow.

It also uses a standard parallel-ATA laptop harddrive. So, remove the default 20 GB hard drive and install a 160 GB hard drive, and for about $60 you have the largest MP3 player ever created. Probably. It’s about double the size of my music collection, which is good because my old iPod was still too small for that. This is what I will be doing.

Also worth noting, the outer casing is INCREDIBLY durable. Especially those little rubber stopper things. And you can’t scratch it without trying, unlike my old iPod which would scratch if you looked at it funny. And, the greatest thing about this MP3 player is that it has digital AND analog inputs, and you can record MP3s straight up at about 180 kb/s. I used to use this all the time to rip vinyl records, or record live shows. Just hook the MP3 player right up to the mixer’s output and there you go. Oh, and it has a built-in microphone. In case you don’t have a mixer.

There are probably a few other things that I’m leaving off about this MP3 player, oh, like how it’s basically just an external hard drive that coincidentally plays MP3s. None of this “you have to have a special program to put music on” or “hopefully you have iTunes, and you don’t use Linux, otherwise you’ll never get it to work without doing something really crazy.” Nope. Just plug it in with an A-A male-male USB cable to any computer and drag-and-drop. This is how MP3 players should be. (Listen up, Apple.)

So this one had a bad hard drive. I just realized how much I relied on my iPod, and it recently broke. Something about heat, and one of the ICs getting damaged. Something overly complicated. Any way, I was motivated to fix this and plugged it up, and it sounded like a bad hard drive. So I removed the old one: 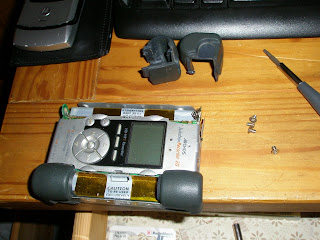 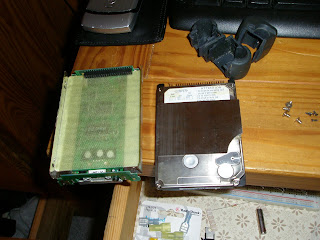 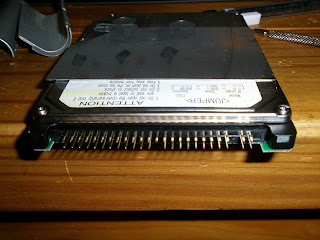 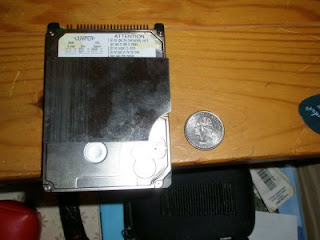 Sure enough, it’s just your standard 2.5” laptop hard drive. So no problem! Just run to BestBuy and pick one up. The hard drive kind of lifted out of its mount, which I guess was a little weird. I felt like I was straining the pins on the motherboard. But everything worked out.

It’s important to note that this MP3 player does not work properly on AC alone, the AC adaptor is pretty much only used to charge the batteries, even when the player is running. It must have batteries in it to work. Which reminds me of ANOTHER thing that makes this MP3 player great. It takes four AA batteries AND can recharge a set of rechargeable AA batteries! So, getting a set of rechargeable AA batteries and the MP3 player will take care of them for you! And when they run out on a long road trip, just pop in some Duracells or whatever and it’ll still work. No more messing around with weird Apple proprietary adaptors and permanent batteries that wear out after a year of use.

Any way, the MP3 player won’t work without batteries. With the new drive in and no batteries, I kept getting a “hard drive register error” and remembered that this was a quirk with this MP3 player. It really needs batteries! Good ones!

While I was out I remembered another cool thing about this MP3 player. It has discrete on/off/play/pause/volume up/volume down/back/forward buttons. Unlike an iPod, which has to be all synergizing. 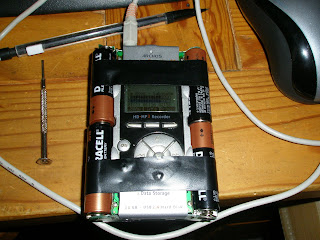 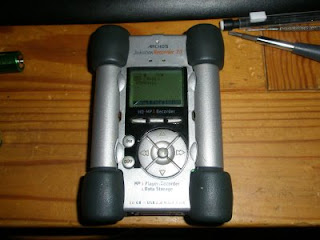 Getting new software on the new hard drive wasn’t too complicated. I use Ubuntu Linux and using GParted to initialize and format the partition to FAT32 would have worked had I tried that first. It’s what I ended up doing. But I had to be all “Windows will probably be able to do this easier” even though I had never done it in Vista before. Mistake. Leave it to Microsoft to hide such a key feature way in the back of some utility and make it impossible to figure out without using the Google. Any way, once the drive is initialized and formatted, everything works just fine. All the firmware was already on the MP3 player from before, so it wasn’t necessary to flash it with new firmware. I did already mention the issues with the batteries, so once I figured that out everything was smooth sailing.