Long story short, if you leave your iPod in your car in the summer in Charleston it will probably break. Especially when you used to cook pizza in the summer on your car’s black vinyl interior. So now, on my iPod, the chip that controls the headphone jack only works if it’s cold. Go figure. And as I’m poking around on the internets looking for someone who will give me more than $20 for my initial $400 investment, I got frustrated and decided I’d do something with my iPod. Since it can only work when it’s cold, it seemed logical at the time to build some speakers into our refrigerator and play music on the cold iPod, so when someone is getting a refreshing beverage they’ll be refreshed with some pleasant tunes while the door’s open.

First thing’s first. I don’t want the speakers to be on all the time, using up power and being annoying to everyone around, muffled behind the closed door of the refrigerator. So I had to figure out how to wire the speakers into the refrigerator light so they’d turn off when the door shuts. After many ideas, including photodiodes and relays (my previous project was supposed to use relays and then it turned out to not need them, so I was wanting to use them here), I found this neat gadget at Home Depot for $3 that makes life a lot simpler. 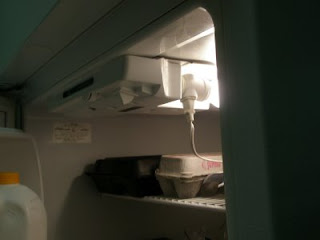 Here are the speakers that I bought at Goodwill for $4.99 but they gave me a Canadian penny back, so they were an even $5. In this picture they’ve already (obviously) been installed in the refrigerator. 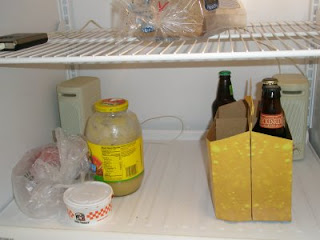 So now the speakers turn on and off with the opening and closing of the fridge door. Next up is getting that pesky iPod wired up. The iPod is set up to play a playlist (summer playlist now) continually all the time. 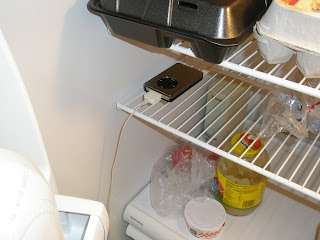 Any way, the iPod can’t start up and get a song going fast enough for the typical trip to the fridge (plus I don’t want to write a program to get it to do that), so I decided to have it play music all the time. It doesn’t use up that much power so this isn’t a big concern since the speakers turn off when the door shuts. But, since the receptacle I installed at the door light are only on when the door is open, I had to apply external power to the iPod by running an extension cable out to a regular wall outlet. 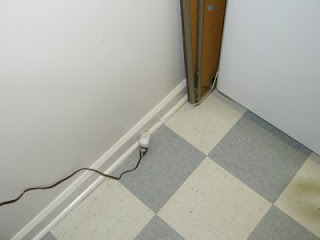 Works perfectly. I love random ideas. The only downside here was that I did this on the Fourth of July in the afternoon, and didn’t consider the possibility that the iPod and speakers would be set to an insanely high volume (which they were), and that I wouldn’t be able to tell since the iPod hadn’t gotten cold enough to work yet. Then we left to watch fireworks, and my roommate and I came back at different times late at night (not in the best frames of mind) and opened the fridge to grab a drink and got extremely surprised by random tunes from a place they are not normally playing. Once the volume was adjusted it caught on pretty quickly though!