I’ve been in school since August, which leaves little time for building fun side projects like I do when I’m not in school. What I have been building has related to our first senior design project, where we were asked to build a robot that could “perform” laproscopic surgery.

You can read about that here.

The project was interesting because we were allowed to use a $4500 computer and microcontroller to interface motors to, and it was definitely a good learning experience, as the popular cliche goes. I think the reason we were assigned this project is because our professor was asked to build one by some company, and he used us to get ideas for how he wants to build his. Whether or not that is true is something that wasn’t discussed, but that’s the rumors that are out on the streets.

While I was doing that, I have had lots of ideas for things to build which I will probably put up here in the next couple days since I have to go back to school in about two weeks.

First up, things I have actually done but didn’t put up. First first up, Sue! I put the stock radio back in the center console but kept the aftermarket head unit wired up. I have to find another glove box from a junkyard to cut apart to put the aftermarket head unit in. I don’t want to cut apart the stock glove box, just in case I want to change it later on. Pictures will come later.

Sue also needs a new distributor. I spent a couple of weeks hunting down new seals for her current distributor to try and fix an oil leak, removed the distributor to replace the seals I thought were broken, but I don’t think that any of those things have fixed the oil leak. I think the only solution is to take the distributor itself apart and fix a seal on the inside, which I probably won’t be able to find parts for, so it may be more economical to just replace the entire distributor itself. Or, just ignore the problem since it’s not a dramatic leak. Not sure what I’m going to do yet. Something to note though, when the distributor comes off the engine block, oil will come out. So that’s something that needs to be prepared for, unlike what I did, which was panic when oil started pouring out of the engine.

Here’s the more exciting vehicle stuff. I bought a truck! 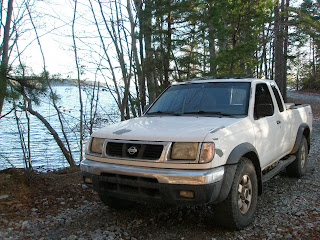 It’s a ’99 Nissan (of course) Frontier, with a King Cab and four wheel drive. It also has really nice 31” 10.50 BF Goodrich all-terrain tires on it, and I’ve added a nice UWS toolbox and Cobra CB radio with a quarter-wave whip antenna. I got the truck for a considerable amount under Kelly Blue Book, after learning my lesson with the 300ZX. DON’T BUY ANYTHING OVER THE KBB PRICE BECAUSE YOU ARE SURE TO LOSE A LOT OF MONEY IF YOU TOTAL IT. That said, there are some things wrong with the truck that I kind of like because now I get to fix them. The other important thing, I have found, is that it is a lot more fun to go romp around in the woods with a 4×4 truck than to tear around on a road in a sports car and be paranoid about cops all the time. Plus it’s a lot safer. Any way…

The most noticeable is the paint job is very, very bad. Paint flakes off at speed on the interstate from areas on the hood, the doors, the gas cap, and a few other places. The plan is to find some white primer and just keep the truck from rusting. It’s a truck, so it doesn’t matter [to me] what it looks like as long as it’s functional, but I would like to keep the body in good condition.

Most of the rest of the things wrong with the truck are very, very minor. Right now the right passenger-side turn signal doesn’t work, and I found out a month after I bought the truck that the fog lights don’t work. It seems like they’re not wired up properly from the factory, so I’m going to have to figure that out. It’s a puzzle!

I was given two 10” MTX subwoofers and put those in the KC part of the cab of the truck. I got a fairly small Pioneer amplifier to push them and they add just the right amount of bass to the speakers. I believe I will be upgrading the speakers in the doors so that they will be able to keep up with the subs, and possibly upgrading the amp on the subs as well. The goal is quality though, not quantity.

I will hopefully be adding a 1000-watt power inverter somewhere in the truck as well. That, however, will be a separate entry here if I do it. I have a 300-watt inverter now (not in the truck) but it’s not enough power to run a drill or other power tool so it’s not as useful as I think it should be. I think that’s about all on the truck.

The REAL interesting stuff coming up is going to be the designs for the light switch in the kitchen in my apartment. My roommates and I are tired of getting up off the couch to turn off the kitchen light when we’re watching TV (since we have a projector, the light in the kitchen washes out the picture), so I’m going to build something with a Arduino microcontroller that allows us to turn off the light from the couch without getting up. In the future, it may also be able to turn on the kitchen light when people come in the front door. But that’s something for the future!