Skip to content
I’ve decided that this post is going to be short, because the pictures should be pretty self-explanatory. I just need to get a couple notes in so I don’t forget them myself. The goal was to hardwire standard power (120V AC) on my truck’s dashboard instead of having an inverter flying around everywhere, loosely connected to an amplifier. I’ve found that AC is useful to have around, if you need to charge a laptop/phone/the Brypod or if you get locked inside of something and have to pull the Dremel out to cut down a fence. I have used an 800-watt inverter in my truck for about six months, it came out of a power supply I built about three years ago. Any way, I hit the junkyard and got this part for free, cut some holes, painted it black and coated it in acrylic, and bolted a switch and a power outlet to it. (I didn’t want to cut into the one that was in my truck, in case I decide to sell it later on.) 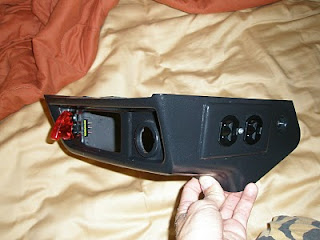 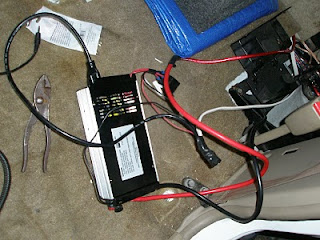 Hopefully this shows the wiring on the inverter well enough. The only real shortcut I made was using 14/2 house electrical wiring instead of 14/3, and using the grounding wire as the 12V signal for the relay coil. The black and white wires I used for 120V hot/neutral, and I bolted the ground for the 120V and the 12V to the same point, just for simplicity. I assume the white insulation around the wire bundle is enough to handle 12V, and this has been in my truck for two days now and it hasn’t caught on fire so I’m probably right. 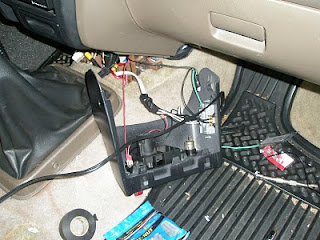 The wiring up at the front of the truck was less glamorous, but everything fit in all nicely when I put it together, which I was a little worried about because things are kind of crowded up in the dashboard any way. Hopefully I never have to take this part off again. 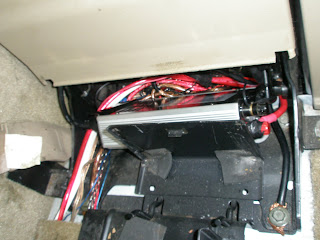 The inverter is mounted under a plastic cover behind the driver’s seat where the jack is stored. There was just enough room. The extra wires are there in case I want to put in another amplifier for the stereo. Just in case. 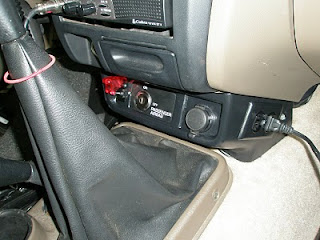 Here’s the finished product. The switch on the left is the standard safety switch I’m such a big fan of, it controls a relay that I soldered to the switch on the inverter itself. The LED on the switch lights to indicate the relay coil is energized, which should mean that the inverter is on. Also I made the mistake of turning the truck on with that airbag switch unplugged, so now I’ll have to reset it for the third time. I hate that light. 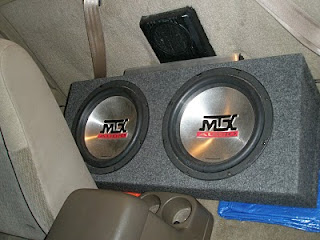 And just for fun, these are the two 10” MTX Thunder 5500’s that I keep in my truck. The driver’s seat was out so I snapped a picture. No one can really sit in the back seat any way, so this is a much better choice for the space.