Skip to content
This project is a combination of two projects, both of which have been going on since mid-summer! Actually I remember a situation during the summer involving a girl, some high tension power lines, darkness, and fluorescent light bulbs in which this project was about half finished and I remarked to the girl that I should probably go ahead and finish wiring it up so it would have been easier for me to see while backing my truck across a field near this really dark substation. Long (but awesome) story…
Well, three (read: four) months later and I have finally finished it. I wanted extra lights on the back of my truck that would help me see while backing up (obviously) but also that I could switch at will to light anything I wanted. The lights I have aren’t really that bright but they are better than just the normal reverse lights by themselves, and I can always put different lights in. Proof of concept! 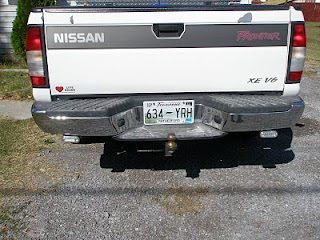 The second part of this is a clutch bypass switch, and it is only related to the reverse lights because both parts share a common power bus. I also thought of how to make this switch better when making the wiring diagram for the reverse lights. Sometimes things just happen. The basic premise for having a clutch bypass switch is if the truck is offroad and in a precarious spot, and stalls for some reason, the driver needs to operate the gas and brake pedals simultaneously with no extra foot to push the clutch in to start the engine. Normally depressing the clutch when starting the engine is a safety feature which prevents the vehicle from lurching forward due to the engine turning over with the truck in gear. Could be disastrous. Off-road, however, it’s more of a nuisance. So in aforementioned precarious situation, rather than awkwardly try to operate three pedals with two feet, a switch is thrown that makes the truck think the clutch is depressed, and when it is started the truck suddenly springs into action! Clever!
Any way the problem I had with the initial wiring of the clutch bypass switch was that the safety switch I installed had an LED indicator light to tell the operator of the vehicle if it was on (clutch depressed) or off. This light was not functional at first because the wires on the clutch button weren’t power wires, they were only signal wires, and couldn’t light the LED. So I wired the switch up to power to drive a relay which operated a switch in parallel with the signal wires, which enabled the LED. The problem was that I would use the switch and forget to turn it off because the light wasn’t working. Problem solved!
I meant to include pictures of the in-dash wiring and the new relay (which I installed near the steering column to save wire) but I forgot to take this picture while I was cleaning up the wiring. These pictures will have to do. 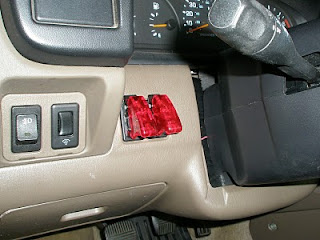 With the plastic covers closed, there is no way for the switches to be on. This is a typical safety switch. 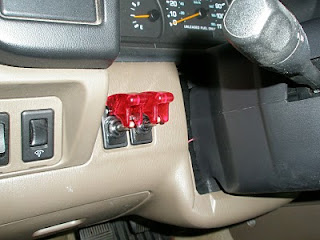 To operate either switch, the driver must flip the red cover up and then throw the switch. 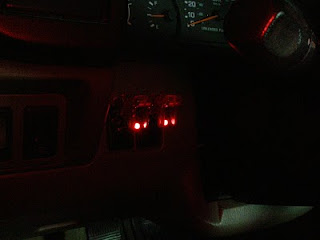 Turning off my camera’s flash shows the LEDs on the tips of the switches that indicate they are on, and the auxiliary reverse lights and/or clutch bypass switch are/is enabled.
Back to the reverse lights. Basically I applied the same principle as the clutch switch to get these to work like I wanted: relays! I ran 12V to the back of the truck and used it on the high-side of two relays. One relay operates if a switch in the cab is turned on, and the other relay operates when the reverse lights are on. To get this to work I cut apart an electric conduit and spliced in a wire, which my handy manual (or “Man Book” as a friend of mine from Canada called it) told me was the yellow one. Also FYI, I have cleaned up the wiring some since taking this picture, it just helps to see it before I bundled the wires up and fixed some of my terminations. 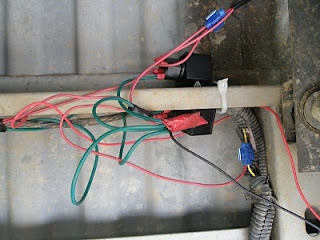 The bolt on the right-hand side of this picture I think is either for the back of the leaf springs or the bolts for the bumper, just to give some direction as to where these wires are.
So, after the weekend, I have this to show for my work! And some other things which I’m not finished yet but will be up later on. 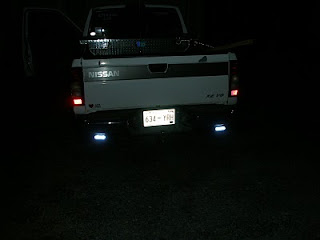 The first picture I took with the flash on, and the switch on the dash on, so the normal reverse lights are not on. 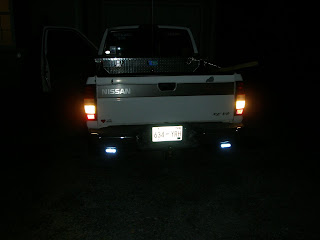 This picture shows the reverse lights on and the auxiliary lights operating simultaneously, without operation of the in-cab switch. 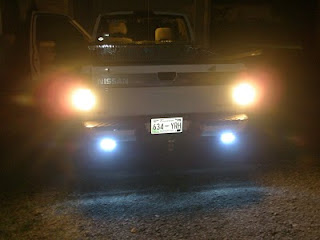 I tried to get a shot of the back of my truck with the flash off. This is the best I could do. Pretty neat though.
And, as always, HAND DRAWN CIRCUIT DIAGRAM! WOO! The middle diagram is the first sketch I made of the auxiliary reverse lights before I realized (and noted in the picture) that my original idea would cause a catastrophic short-circuit under certain situations. Oops! The third drawing is the circuit that I employed, and the first is of the clutch bypass switch with its new relay. Also, BONUS: I remembered to flip the picture sideways so now it’s right-side up. Hooray technology! 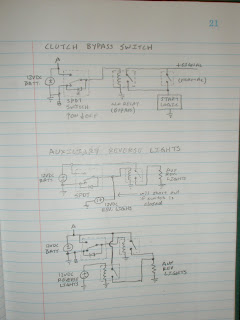 One final note, and making this a three-fer, I have another part to share! I installed this over spring break last March right before/during my 3300-mile surfing road trip with one of my friends from high school. Meet Sally, recent MIT grad who does things with biology now which I have almost no comprehension of! 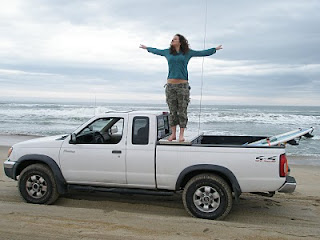 Also I like to show that I actually take my off-road vehicle off-road, unlike most people with four- or all-wheel drive. This picture was at the Hatteras National Seashore on the Outer Banks of North Carolina, theoretically the best place to surf on the east coast. Any way, what I really wanted to put up here was the back lighting for my odometer. Normally it would look like this (at exactly 130,000 miles which I hit during this trip, approximately 15,000 miles ago): 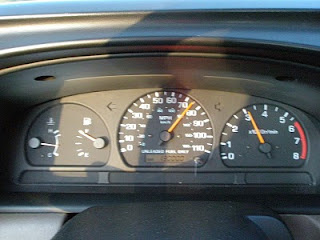 However, some of the back lights had burned out (actually, none did, I just thought this would be cool and I was right) which meant I had to replace them. Only instead of replacing them with normal white incandescent lights, I put red LEDs in their places. Makes it a little easier on the eyes and it’s much cooler, only for some reason the fuel gauge isn’t particularly bright. Oh well, live and learn. 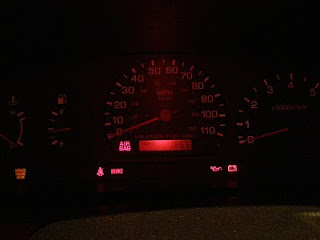 Pretty cool! And, just for fun: 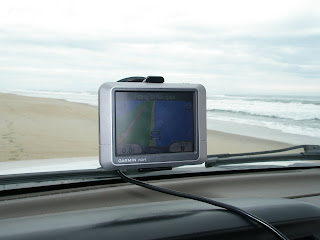