I thought I might fix my iPod (the one that only works when it’s cold) so I can sell it for some extra pocket change, and also have the challenge of how to get music back in the fridge some other more interesting way (such as through the power lines). I thought the problem was with the headphone jack and the various devices that control it, but I bought a $4 replacement from Hong Kong and it still operates the same: only when it’s cold. So that was $4 to figure out where the problem wasn’t, which I guess isn’t a total loss.

In other news, I have figured out a great power-saving scheme for my desktop computer. I had been leaving it on 100% of the time in case I needed to download a file from it remotely. Then I discovered a protocol called “Wake on LAN” that allows the computer to be woken up from suspend or hibernate by sending its network card a “magic packet”. So now my computer is set to suspend after 1 hour of inactivity AND spin down the hard disks, and I can wake it by sending the magic packet from my phone using a Droid app called WoL. I expect this will be useful one day in the future when I have to pay my own power bill. Until then I have hopefully just increased the life of my computer.

Also I wanted to upload a picture for fun. 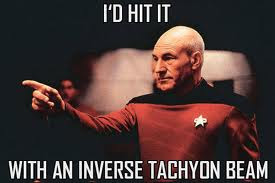