I have this old set of speakers that are in an older post, where I rigged them up to an old head unit from a car. This setup works fine but I think I can do better by constructing my own amplifier specially built for those speakers. My goal has been to get 30 watts per channel, and to build everything from generic electronics parts.

I decided to start small first, since I have never built an amplifier like this. I have built current amplifiers to drive motors, but the low noise, high gain requirements of audio along with spending WAY too much time doing transistor biasing and impedance matching make this job a little bit more of a challenge. Any way, my first design naturally was an LM741 style operational amplifier set up with some negative feedback (the small resistor) to keep the signal from running away and making the sound quality very, very bad. 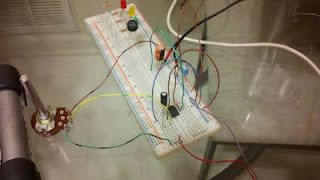 This was a very simple design, and delivered MAYBE a quarter watt to a speaker. The sound quality was terrible but it was a proof-of-concept type design at this point. 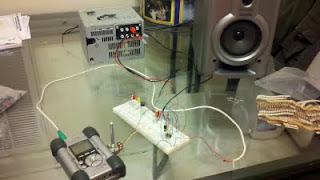 This was my whole setup, with my MP3 player (see previous posts about THAT), breadboard, speaker, and the power supply I built a few months ago (also in a previous post). The next step I felt was to get away from integrated circuits and switch to discrete transistors to drive the speaker. 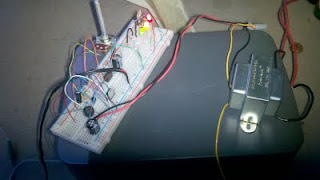 This was my second design. There were some other changes besides switching from an op-amp to discrete 3904, TIP-42 and TIP-31 transistors. The first of which was that I found a little transformer in a box and used it to make a 12V unregulated power supply so I could actually move it around. The second change is that this design actually sounds really good. The simplicity of the amp keeps the sound from getting distorted or over-manipulated (possibly a placebo effect) and I used it for a few weeks to listen to music on the porch. This design delivers about 2W to the same speaker.

I am currently working on the next step which is a 30-watt stereo amp. The previous designs have been mono but when I get the first channel working at 30 watts I will go ahead with building a second channel. Currently the amplifier is in design stage where I am working out some bug which is causing all of my fuses to blow as soon as power is applied. I have completed and soldered together a specially-built 40V power supply for this part, and I have let the smoke out of two transistors that were in my power supply so far, so hopefully that stops. More to come! This has been a long project.

Also I came across something I found to be pretty hilarious while I was at work. Maybe others will also see the humor in it: 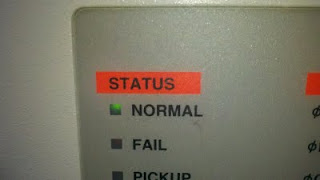