(A quick update on the last post: I forgot to mention I didn’t drive out to or back from California. Google Maps isn’t really intended for plane rides. The rest of the mess on the Eastern Seaboard was driving though.)

So when I flew out to California two weeks ago, there was an interesting film selection for the in-flight movie. The category is one I’ve always found interesting because if even one minor thing was changed in an otherwise formulaic storyline it would be the most interesting movie ever because it would have broken the “rules” of the Chick Flick.

For example, if for some reason the protagonist of whichever movie didn’t end up with the right guy in the end. I think in real life this sometimes happens, because real life is rarely like the movies. I can’t think of a single example of some couple I know that’s together because the guy was overly persistent (see: When Harry Met Sally). Social norms aside, I’m also wildly attracted to movies and books with surprising endings, which are not necessarily “surprise” endings, although those are good too (Fight Club and The Sixth Sense spring to mind). Good examples include 2001: A Space Odyssey and 1984.

But any way, I thought about this later on in the trip when I had plenty of time (while I was putting a new starter and battery terminals in the Blue Bomber, our family’s ’96 Honda van with nearly 200k, in the picturesque and lovely town of New Haven, Connecticut) that maybe in real life when the girl doesn’t end up with the right guy, or things don’t work out between two people, that maybe this would just be cutting the movie off in the middle. There’s still more life to get to before the end of the movie. So, maybe the otherwise superficial movies are relatable to real life, but end of the movie isn’t obviously approaching. 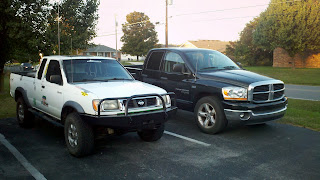 Now comes my opportunity to tie this thought into a new project: I am currently in the care of a very large Dodge Ram. It’s currently parked next to my Frontier. It’s the 2005 Big Horn edition of the 1500, and the engine is approximately four thousand times larger than the V6 in my truck. I am taking care of it for a friend of mine while he’s deployed in Iraq, and when I got it, it only needed the brakes rebuilt and an exhaust leak somewhere welded shut. Now it seems to have developed a problem with the EGR valve, which in my opinion shouldn’t be built into cars at all, but once it’s designed to be there, if it malfunctions it will kill the mileage on whatever vehicle it’s on.

I’ve heard that a good way to fix a stuck EGR valve is to spray the inside off with carburetor cleaner and the plunger will magically spring back to life! So I took the air box out of the truck to give myself room to work: 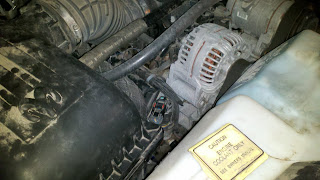 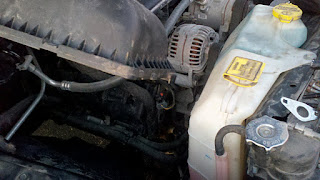 Then I unclipped the wire from the top of the valve (the valve itself is the soda can-shaped thing to the left and slightly below the alternator, if you’re looking at the engine from the front of the truck, which in these pictures is on the right). The next step was unbolting two 8mm bolts and two 10mm bolts holding the valve on the engine. The reason this is interesting is because it’s a Dodge so I was expecting the bolts to be standard, not metric, but apparently Chrysler builds some of the Hemi engines in Mexico, where they use metric tools. Like the rest of the world except the United States. Frustratingly. Any way! This is not really surprising, as almost no cars are completely built in any single country any more regardless of brand name. 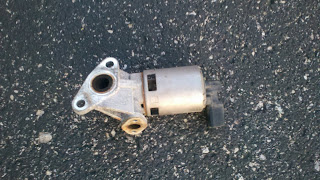 Once the valve is out (being careful not to lose the two thin seals attached to each side of the valve) I sprayed it excessively with carb cleaner and worked at it with a screwdriver to try and get it free. And apparently it worked! 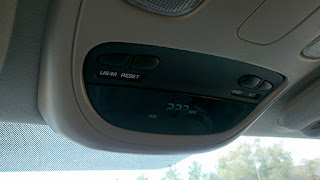 (That says 22.3 mpg. It averaged 18 driving from Fredericksburg, VA to Manchester, TN.)

And even though I like to talk about how working on cars makes me feel better because everything is right in front of you and makes sense and fits together in rational ways (unless it’s the electric system on a British car), sometimes things just don’t work out. But they will eventually! Once you make it to the end of the movie and get the new EGR valve. Or make it to any number of other things that this metaphor could potentially apply to…

(Hint: This metaphor was not originally thought of in regard to truck repair but it fits! And ironically, the check engine light came on while I was driving the final leg of my vacation. But! Now the truck has cleaned battery terminals and a battery, starter, and alternator that have all tested good. Plus fresh oil! And I’ve learned a lot already about Mopar engines, like how once you disconnect the battery and reconnect a new one, that the computer has the starter turn the engine over about a flobbidy jillion times so it can get the cam and/or crank sensors re-calibrated. Thankfully. I thought I had broken something.)