As cliché as it is for a blog to comment on how often it doesn’t post, I actually have an excuse! Almost everything I’ve been working on for the past four months have either taken much, MUCH longer than I’ve hoped to finish, or have been failures, or has been interrupted by me traveling to South Carolina for a week, Germany for a week, and California/New England for two weeks. So far I usually don’t post until after I’ve completed a project, unless it’s a big project that I do in parts. But here’s the run down on some minor stuff that I have done, and updates on what I haven’t finished.

Before that though! I was just on vacation and here’s where I went! If the link is short enough to fit here:

If that’s not working then here’s a link to the map. Make sure to zoom in on New England! That was where half the adventure was.

If that’s not working then here’s a condensed list of places I went: San Francisco, CA, Brattleboro, VT, Newport, RI, New Haven, CT (which I only stopped at to put a new starter in the van I was driving), and Washington, DC. I did a lot of visiting of friends in California and New England and also a lot of surfing in California and Rhode Island. That’s 50% more states than I’ve surfed in to date! Also I saw this in the Haight-Ashbury part of San Francisco and I am extremely jealous: 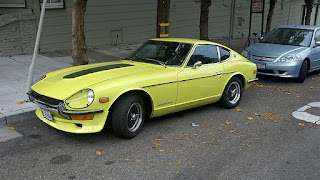 One day I’ll have a 280Z for my own. On to more tangible things now! Mostly because I’m terrible at taking pictures of my vacations. I have lots of good stories though.

The stereo amplifier, for some reason, keeps burning its voltage regulator out. I’ve rebuilt the power supply four times now (which is a hassle because it has a JB welded heat sink) and then I thought I realized one night what my problem was and I ripped the amplifier circuit out of the breadboard to start over, except I was in a questionable state of sobriety at the time I thought I figured it out (we were having a party and it was on the table in the kitchen), and I haven’t quite figured out what I had figured out when I tore it apart. So I’m trying to reconstruct all that on my desk now. I need to get this finished because Sue’s back on the road and she needs the head unit that’s currently driving the speakers in my spare bedroom. So when this amp gets finished it’ll drive the speakers here and Sue will have a head unit with an aux input.

I also spent about two months working on repurposing (government word) an old DirecTV satellite dish to transmit and receive Wi-Fi signals. In theory the antenna would have an 18 dB gain over a typical router antenna (and add an element of directionality). However, Wi-Fi is in the 2 GHz range, and I am used to working with radio waves that are two orders of magnitude larger. Larger waves are much, much less finicky. So whenever I feel patient, I’ll go back and try and calibrate the biquad element that’s attached to this big dish that’s sitting in my spare bedroom next to my ironing board, mountain bike, and truck bumper. (More on the bumper later).

Next! There was one good day of wind this past summer and I went out on the windsurfer but the old joint that holds the mast to the board ripped. There was wind from the point of it breaking until the new one came in the mail. There hasn’t been wind since even though we’re several weeks into Fall, which should theoretically be when the wind starts to recover from the muggy, stagnant summertime. Haven’t seen it yet. 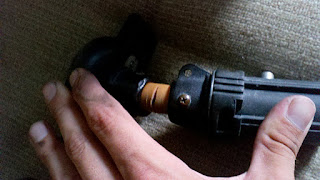 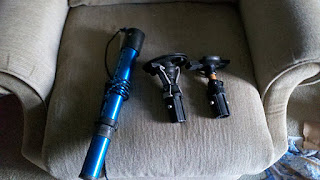 One of the smaller jobs that is ongoing with my truck is trying to keep the paint from falling off. I think I have come up with a good (and pretty cheap) way to accomplish this: 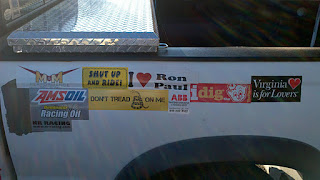 This isn’t the only spot on the truck that’s starting to lose its paint, just the worst. It was obviously repainted before I bought it, and best guess is that whoever did it didn’t know anything about the purpose of primer. Oh well, the truck was very, very inexpensive for me, and I beat it up when I take it off road, so there’s no sense in it having a good paint job when it’s just going to get run into a hedge or other obstacle. Special thanks to my parents for providing almost half of those stickers.

Speaking of paint, I painted Sue’s wheels, which are sort of new! I found them on a 1998 Nissan 200SX SE-R (basically, what Nissan called the racing version of their Sentra Coupe in the late 90’s). They needed TLC, and that’s what they got. Except for Discount Tire breaking one of the center caps and losing another, and Nissan not stocking the center caps at any dealer any more, making it impossible for me to get replacements, they look much better now. In the future, I plan on putting on a very expensive suspension (Sue needs it, she’s probably never had the shocks or springs replaced) and tinting the windows. 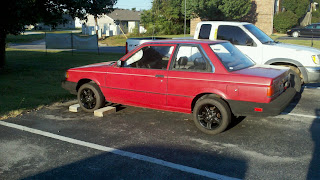 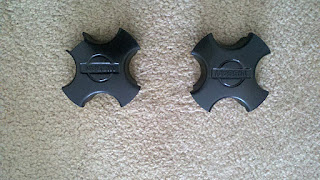 Also don’t think I’ve forgotten about the Turing-Complete Slow Cooker. I’m just waiting for the winter when it gets dark too early to do anything productive outside after work.

On an unrelated note, this was a good day: 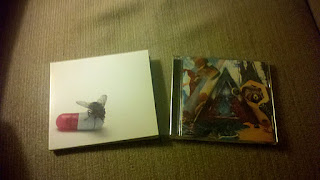 I am also wondering if my blog should be more personal and/or accessible/interesting to people/persons that aren’t me. Maybe I’ll give that a shot. Wish me luck!