So a few months ago I bought this: 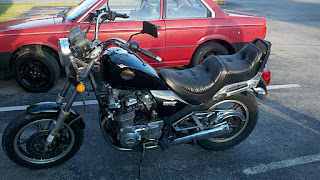 I found it for dirt cheap and it only needed a little bit of work, including a new speedometer and new horns. And some TLC. I thought I might be able to make some money by flipping it. Then I decided instead that I should move to Florida: 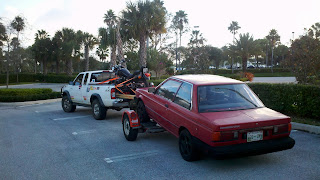 So I loaded it into the truck bed and put Sue on a trailer and drove 14 hours. And I think it put a little stress on the truck’s springs: 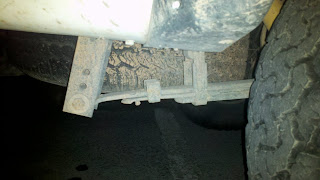 It ended up making it down just fine, but it was a little worrisome. (Those will be getting replaced pretty soon.) But! About the same time as all of this, I designed and built a circuit that will hopefully connect to Sue’s center brake light, so whenever the brakes are pressed the center light flashes eight times and then stays on until the brakes are un-depressed. 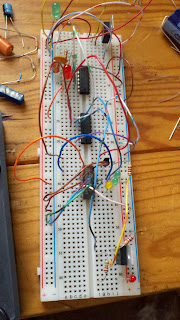 Currently Sue doesn’t have a center brake light because I removed it to remove the back dashboard, so I could put some speakers in back there, and when I pulled the cover off the entire housing for the brake light disintegrated. So once I get a new center brake light built I will be able to attach this to it: 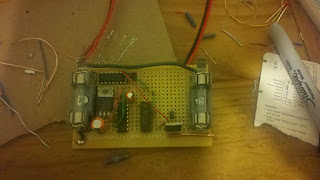 The only thing I couldn’t quite figure out about it is that it seemed like it wouldn’t flash exactly eight times every time at first. If I flipped the switch for it off and on without waiting a few seconds, it would behave erratically. This was fixed by putting a capacitor from the positive rail to the ground rail but I’m not sure exactly why this stabilized the behavior of the circuit. I have lots of ideas about why but there’s no telling exactly why without an oscilloscope and some other things. More pictures in the future when Sue gets fixed up!