Time to try something new! I just put a new bumper on my truck. And, since it was made out of steel instead of plastic and aluminum, I was obligated by natural law to put a winch on it. What started this project was an “altercation” offroading around the Tennessee/Alabama border in which my truck suffered from a minor case of getting its bumper ripped off. While this could be regarded as a “failure” of sorts, I would like to try to intersperse pictures of my new truck’s bumper with some commentary on other types of failures! This may end up being very cheesy. But they are good pictures so it would theoretically be possible to just scroll through them. Problem solved! 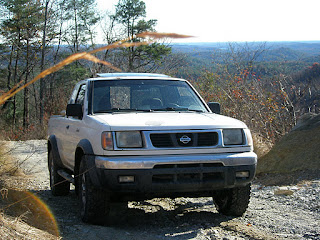 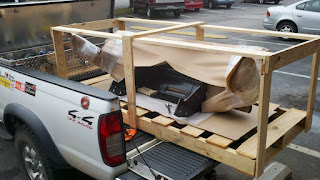 Picked up the new bumper from a UPS semi in a vacant parking lot in Manchester since he couldn’t get the truck to my apartment. Got a flat tire in the process by running over a piece of flashing and a screw. Live and learn I suppose.

I had an interview with an automotive company in South Carolina a little over a year ago. It was the worst interview of my life (it was six hours long and done in stages with horrible unsolvable interpersonal challenges, unless you are reading this and you are from said car company and you remember me from before, and you would like to hire me now, in which case the interview(s) was/were actually FANTASTIC, and I am just trying to illustrate a point now, in my blog). Despite my generally poor experience, they did ask me a very interesting question during the “standard” part of the interview that I have thought about extensively since then. 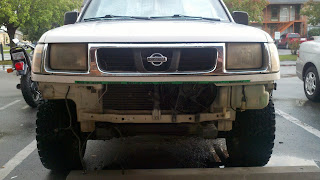 I added the green stickers for the usual reason: prevention of rust.

The usual interview question would have gone something like, “What are some of your weaknesses?” which is my least favorite question to answer in an interview but one that I am prepared to (hopefully) schmooze my way out of. It’s an open-ended, fairly useless HR question and requires an answer that is just as meaningful as the question. Any way, the interviewers had a different take on the standard question, which was “What was your biggest failure?” I gave an answer so bad that I could easily answer it now with “The last time someone asked me that question.” 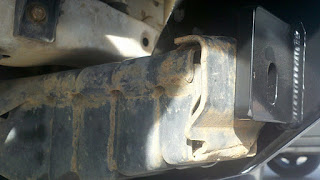 I ended up having to hit the bumper mounts excessively hard with a hammer (read: one of the linemen from work used the hammer) but it went on. Those metal ridges on the top were getting in the way, it’s like the front part of the frame is two pieces, with a cap on the top. It was about a quarter inch away from working. I think the truck was in a minor front-end collision before I bought it and so the frame was slightly bent. There was also evidence that the frame was welded post-assembly. This type of event would certainly be a good reason to re-paint a vehicle, which it looks like happened as well. It’s like I’m a private detective in a murder mystery! Any way…

In retrospect I have determined the correct answer to this question, which is that there ARE NO FAILURES. As long as I learn from my mistakes, which, if this blog is any evidence, I do all the time. Recent failures I’ve learned from (I am not making any of these up) include using a propane torch on a wooden deck to solder an antenna together, making sure to unplug the dryer before fiddling with its wiring (yes, I am an electrical engineer, but I don’t remember them teaching us any common sense), using the mast from my windsurfer to take a satellite dish off the roof of a house, and getting stuck on the New Jersey turnpike while being a Southerner who isn’t used to having to pay tolls or the smell of Newark. 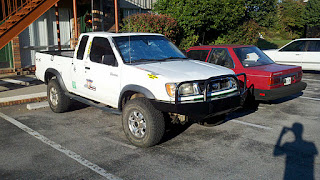 Whose awesome shadow is that? This guy, with the thumbs. Also, Sue says “Hi”. The winch hasn’t been installed yet. Wait until the next picture.

Even normal, run-of-the-mill failures are easy to learn from. I failed three exams (out of five) (in a row) in a class called ECE 427: Communications Systems, one of the hardest classes on the face of the planet and ALSO in a particular area of electrical engineering which I am neither A) good at or B) interested in even a little bit. I still made a C (almost a B actually) in the class because I learned how to… not fail the exams.

I think if this question is asked in the future I could always start off with a half-true joke: “Oh, you mean besides with women?” [Cue awkward laughter in interview room from people who are pretty much strangers…] Perhaps, maybe, that’s not the right way to approach the question. 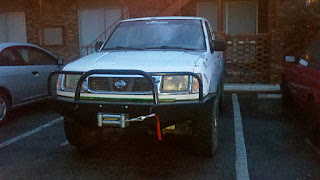 With winch installed. Truck power! Sorry about the low light, it was stormy today. There will be more pictures when I get to take it offroad, hopefully this weekend at Lake Jocassee, one of my favorite places in the entire world!

Long story short: Even though I seem to have come to very cheesy conclusion about life, it is still a good lesson to learn. There are no failures! Maybe a famous person said something more quaint about it. And now, as a bonus, my truck is more manly, awesome, and less prone to failure while on the trail. Maybe I’ll even get to use the winch to help people get out of snow drifts this winter!

Also here is a CAKE song as a reward for reading this whole thing. It’s one of my favorite songs.